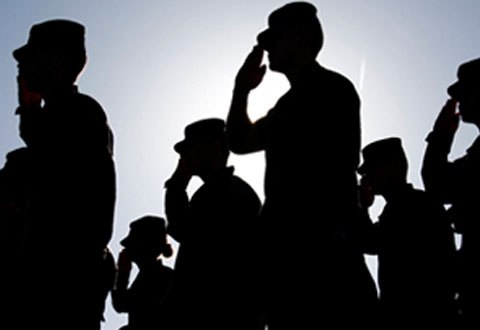 Beyond the data are the lives of Soldiers and families these scientists hope to someday touch.

USAMRMC awarded $17 million to the Military Suicide Research Consortium (MSRC). Internationally recognized researchers Peter Gutierrez, Ph.D. of the Mental Illness Research, Education and Clinical Center (MIRECC) at the Denver Veterans Affairs Medical Center, and Thomas Joiner, Ph.D. of Florida State University, will bring their expertise to MSRC as the consortium co-directors.  Each affiliated institution was awarded $8.5 million to address this urgent public health issue across the military and the general population.

"The innovative multidisciplinary approach of the MSRC facilitates rapid translation and dissemination of cutting-edge suicide research findings. This capability will enhance the military’s ability to quickly identify those at risk for suicide and will result in more effective evidence-based prevention and treatment strategies. The MSRC is an integral component of the Army's suicide prevention research strategy and supports the ultimate goal of reducing suicides," said Col. Carl Castro, MOMRP director.

This is the first collaboration of its kind incorporating military and civilian efforts to support national and international military-relevant research efforts from multidisciplinary practice areas (behavioral health, emergency departments and primary care clinics) to address suicides in the military. Through a multidisciplinary approach and the use of state-of-the-art research methodology, the MSRC will yield new scientific data regarding suicidal behavior. Novel findings will assist in the development of more effective prevention interventions, risk assessment methods and treatments to decrease suicide. Findings also will serve to provide recommendations for improving policy and clinical practice guidelines.

The consortium supports the mission of MOMRP by facilitating the development of an evidence-based comprehensive military suicide prevention approach that includes risk screening, assessment, and prevention and intervention efforts. The consortium will monitor all current suicide research, as well as integrate the currently funded DOD suicide prevention studies. The MSRC will further contribute to the ultimate goal of MOMRP by expanding the knowledge base and capacity to prevent, treat and enhance the quality of life for servicemembers and civilians who are affected by suicide and suicide-related issues.

"Assessing risk for suicide has been the focus of extensive research in the civilian sector,” Gutierrez said. “However, very little is currently known about how relevant existing tools are when applied to the military. The consortium will allow us to determine how best to screen and assess personnel, develop effective interventions and ultimately reduce suicides."

Joiner and Gutierrez are exploring this question to develop better assessment tools to identify those at greatest risk and testing interventions to save lives.

Other strategic military suicide prevention efforts include the Army Study to Assess Risk and Resilience in servicemembers (Army STARRS), the largest epidemiological research effort examining mental health, psychological resilience, suicide risk, suicide-related behaviors and suicide deaths in the Army to date. Army STARRS is a collaborative research effort between the Army and the National Institute of Mental Health that began in 2008. In 2009, the MOMRP also held a series of workshops with leading suicide experts and military stakeholders, which resulted in research recommendations in four focused areas: suicide risk screening and assessment; universal prevention training; indicated interventions to manage suicide behavior and refining the Post Deployment Health Assessment and the Post Deployment Health Reassessment.

In addition to the Army STARRS study, the DOD has a significant investment in studies targeting the identified focus areas. The Defense Centers of Excellence, in collaboration with the DOD, serves as the chair of the SPARRC. This committee was developed to serve as a primary forum for ensuring coordination and consistency in system-wide communications related to suicide, risk reduction policy initiatives and suicide surveillance across the DOD.

The MSRC will further augment these efforts to achieve the primary goal of reducing suicide and other mental health outcomes to enhance the quality of life of servicemembers and their families.